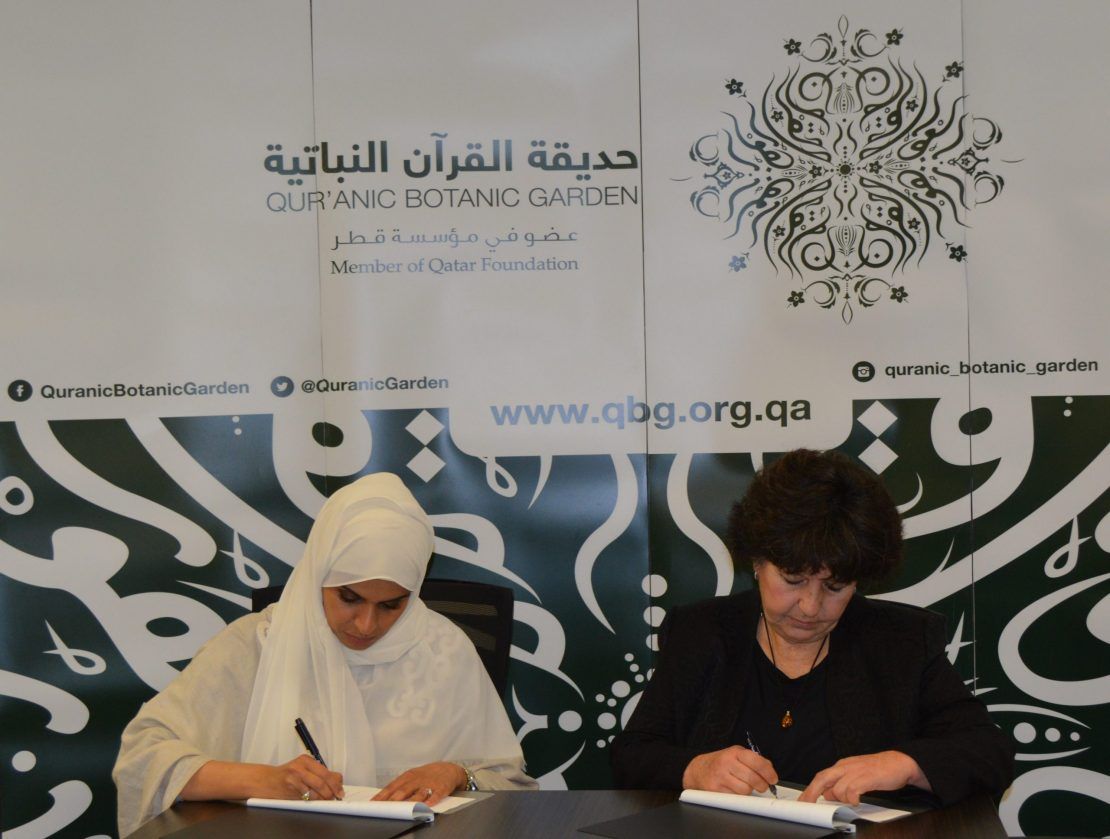 Qur’anic Botanic Garden (QBG), a member of Qatar Foundation for Education, Science and Community Development (QF), and the Islamic Culture Foundation (FUNCI) of Spain have signed an MOU to collaborate in bringing the AI-Andalus Garden Exhibition to Qatar. The exhibition will be held at Katara Cultural Village in April 2018.
Created by FUNCI, AI-Andalus Garden Exhibition is an expression of the peaceful coexistence among different cultures and of the respect for environmental and historical heritage through one of the closest aspects to the everyday life of people: Nature and gardens. The exhibition previously toured with great success across several countries, including, among others, Spain, Morocco, Lebanon, Syria, Saudi Arabia and Kuwait.

QBG welcomed Mrs. Encarna Gutierrez, Secretary General, of the Islamic Culture Foundation, to Doha on December 20, to meet with Mrs. Fatima Saleh Al-Khulaifi, Manager of the Qur’anic Botanic Garden, to sign the MOU, strengthening mutual cooperation between both parties.

Mrs. Al-Khulaifi said: “It’s a pleasure for me to sign an MOU with FUNCI, as it’s a great benefit to both sides to join hands and to cooperate in caring for our Islamic culture. This exhibition highlights the importance of gardens in Islam and the extent of Muslim interest in this area. This is achieved through presenting some of the tools that were used by Muslims in Andalusia for agriculture, and in motivating audiences to take care of the environment to protect our culture.”
Mrs. Al-Khulaifi, accompanied Mrs. Gutierrez in visiting the Qatar Foundation Plant Nursery, Qatar National Library, HBKU’s College of Islamic Studies, the Museum of Islamic Art, and Katara. Mrs. Gutierrez commented: “Qatar has achieved great progress and has become one of the world’s leading countries in the field of education. Together we aspire to show the depth of Islamic civilization and culture and the development of Muslims in Andalusia.”

QBG is an active member, since August 2015, of the Med-O-Med international development cooperation network of the Islamic Culture Foundation (FUNCI), which was established in 2009 by FUNCI in Spain. Med-O-Med, aims to conserve biodiversity as well as natural and cultural heritage in the Muslim majority countries of the Mediterranean and the Middle East.
FUNCI is a Spanish, non‐profit, scientific and cultural NGO, and part of the Spanish Ministry of Culture’s Register for the Protection of Cultural Foundations. FUNCI seeks to show the achievements of Islamic culture and civilization not only from a historical viewpoint but also as tools that can help meet present and future challenges. Throughout its history, FUNCI has worked hand in hand with a large number of Spanish and international institutions.