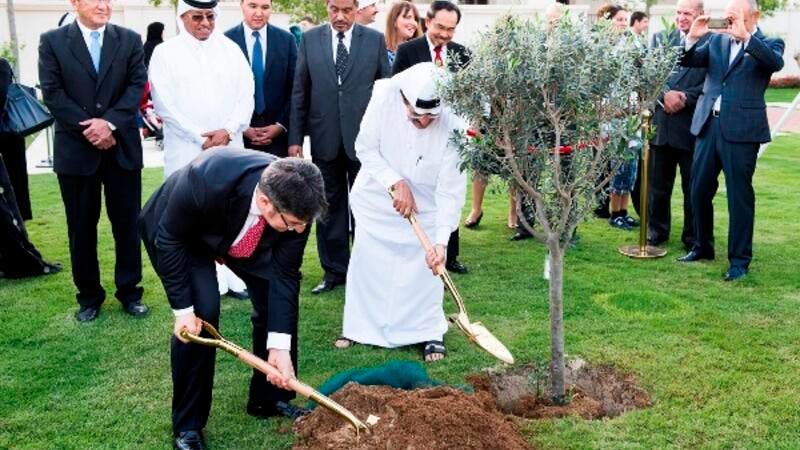 The Turkish Embassy in Doha conducted high-level event to mark the its expressing to support the efforts of the QBG Ghars Campaign, a promising green initiatives launched by Qur’anic Botanic Garden, member of Qatar Foundation for education, science and community development.

The past year has seen the Qatar Turkey cultural cooperation through Qatar-Turkey 2015 year of culture, where several joint cultural events have been unveiled to promote relations between the State of Qatar and the Republic of Turkey through partnerships between cultural organisations and institutions. The Turkish Embassy in Doha has sought to support Qur’anic Botanic Garden, a member of Qatar Foundation members involved in the community development through its environmental campaign “Ghars” which primarily established to increase the number and raise the level of awareness about the trees in Qatar.

To celebrate this occasion, the Turkish Embassy in Doha invited Qatar Foundation leaders, institutions officials, executives and businessmen from both of Turkish community of the State of Qatar to participate in planting trees in the courtyard of the Embassy.

Some of the trees of Qur’anic Botanic Grden are dedicated to this event as olives, figs, Sidra, and Citron, where to give a green message to the community in order to preserve the environment and conserve of trees, as the relentless quest for the event.

On the other hand, Qur’anic Botanic Garden and Turkish Embassy in Doha are targeted together through this ceremonial planting event to raise the environmental awareness to the community, highlighting the importance of increasing the space of trees in Qatar and around the world, and preserve natural resources, especially the trees in their natural habitats. As the event was drawing a green picture to encourage all members of community in Qatar and Turkey to keep their fingerprints on their environment through planting of trees as positive contribute positively to the environment in the future.

On the sidelines of the ceremony, QBG conducted exhibition for traditional tools that produce from the date palm tree, which well-known as they relate to the Qatari community, in order to present it to the Turkish community and explain about the purposes and the traditional use by Qatari society.

The QBG also presented different live-forms of plants and trees mentioned in the holy Quran and Hadith.
The ‘Ghars’ campaign; whose name derives from the Arabic translation of ‘Planting’ from the Hadith narrated by Anas bin Malik: ‘Allah’s Messenger (ﷺ)’, is a brain child of QBG and aims to promote an understanding of the plants, botanic terms, and conservation principles mentioned in the Holy Qur’an, Hadith, and Sunnah. QBG hopes to achieve this by applying scientific innovations, building an appreciation of cultural traditions, and creating a garden that will provide unique opportunities for learning.

The Qur’anic Botanic Garden has established the Ghars Campaign is-line with the invaluable words of Her Highness Sheikha Moza bint Nasser, Chairperson of Qatar Foundation, ‘“We need to care for our natural environment for it was entrusted to us by God to use with responsibility and respect for the benefit of human kind. If we nurture our environment, it will nurture us.”

The QBG Ghars Campaign is on-land translate to the paid efforts of QBG in protection of the environment through tree planting that contribute to environmental rehabilitation and conservation, the garden message through this campaign is a message from Qatar to world of for promoting all towards a sustainable behavior on environmental stewardship in order to reach to an integrated environmental community that effectively participates in Qatar’s endeavours towards establishing sustainable environmental development of Qatar National Vision 2030.

Noteworthy that Ghars Campaign provide diverse year-round awareness activities for all the community to increase awareness towards environmental sustainability and greening issues with working alongside the national institutions in Qatar in maintaining wildlife by increasing the number of trees, with sensing to conserve it, in the global context as the United Nations through the Forests Trees World Day and the Framework Convention on Combat Desertification (UNFCC) and other international treaties which signed by the State of Qatar, as well as those Treaties are recognize that tree planting and conservation involves under sustainable development frameworks for various communities.